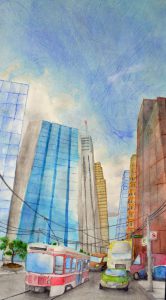 Creating a Vision of the Digital Classroom

Creating a Vision of the Digital Classroom

Undoubtedly the first ten years of the new millennium have exploded with technological innovation that has permeated into all aspects of our education system. Taking into account the pivotal stage of current pedagogy, it becomes important that the voices of those who drive this ever escalating and fast paced change are a key consideration in the process. In the York Region District School Board, we believe that students are a key stakeholder in this digital learning. With new media constantly being incorporated into lessons, it is important that the experiences of today’s learners are taken into account. This paper examines some aspects of current classroom practice from the perspective of students and suggests that technology use can help shape a vision for how to enhance engagement of teachers, students, and school and system leaders to further support the digital classroom of the future.

Preparing Our Students for the 21st Century

Preparing Our Students for the 21st Century

The new millennium has brought about a change in the way we live and interact with one another. It is now a global community that is increasingly diverse, complex and technologically advanced. The kindergarten students we have today will be entering the workforce in about 20 years. With the current global climate, we have no idea what the world will look like in 5 years, leave alone in 20 years. Yet as educators in York Region District School Board (YRDSB), we embrace the mission of ‘uniting in our purpose to inspire and prepare learners for life in our changing world community.’ (YRDSB retrieved 2009). Will we be successful in preparing our current kindergarten students to be ‘learners for life in a changing community?’ The answer to that will depend on how willing school districts are in adopting a paradigm that is different from the 19th Century. This paradigm would depart from the factory-model education of the past being textbook driven, teacher-centered and focused on paper-pencil tasks. The 21st Century paradigm calls for a focus on skills such as critical thinking and problem solving. This paradigm aspires to engage students such that they are not only learning the content and facts, as defined in the curriculum, but also learning how to apply that knowledge in their current lives. It is believed that with such a focus on applications, students are better able to make sense of the world they live in, thereby being prepared to be active members of society. In this paper, I plan to address the conditions necessary in preparing our 21st Century learner. I begin with outlining the overall equity problem that sets the urgency for the paradigm shift.

School leadership is often equated with a person in a formal leadership position, typically the principal (Spillane, Diamond, & Jita, 2003). The categorization of leadership into traits or models, has furthered focused on leaders’ attributes or behaviour, and, as such, has perpetuated the view of leadership in terms of the individual (Spillane et al., 2003). Teacher leadership has more recently emerged as an alternative way of looking at leadership (Harris, 2003), yet tends to concentrate specifically on the role of teacher as an informal leader, with benefits and disadvantages to that role. Recent movement away from role-based conceptions towards distributed views of leadership encompasses the contributions of the many members of a school organization and enhances the capacity of the organization to grow and change. This paper begins with a look at the link between effective school leadership and the formal leader, and then explores the benefits and barriers to teacher leadership. Distributed leadership is further discussed and examined as an alternate practice that builds the capacity of the school organization for growth and change. Finally, the Leadership Framework for Principals and Vice-Principals from the Ontario Ministry of Education (2007) is examined as a framework which enables the practice of distributed leadership; one that is necessary to sustain itself as it responds to a world that is increasingly complex.

Preparing the Learner for the 21st Century

Preparing the Learner for the 21st Century

A new form of dialogue has begun to appear within education – a dialogue that may break the current cyclical nature of playing catch-up to society with which education has found itself entwined (see Zsebik, 2003). It centers on the notion of first order and second order change, a theory that has recently come to light in education that may provide a dialectic for exploring new possible answers to problems that perennially resurface within the educational framework. If it proves systemically beneficial, it may also encourage a lasting transformation to both current and future educational processes that in turn may help to establish a new paradigm for leadership in education.

Leadership and Learning for Higher-order Outcomes: Serve, Support and Engage

Leadership and Learning for Higher-order Outcomes: Serve, Support and Engage

With the advancement of information communication technologies there are new opportunities to engage learners and provide them with learning programs that meet their differentiated learning needs. This higher order approach to learning expands the learning experience and forges new strategies for engagement. The York Region District School Board (YRDSB) is working towards a new vision of leadership and learning that engages all learners in higher order 21st century models of learning. The authors of this article discuss the research that informs the implementation of the vision that serves, supports and engages all learners. Supported by the lessons learned from the Advanced Broadband Enabled Learning (ABEL) and Learning Connections (LC) programs the strategy includes; seamless service to information, resources and tools; learning and training support; and, engaging all learners with the knowledge, skills and attitudes they need for success in an interconnected global world.

The Effect of Project Based Learning and Student Engagement and Motivation: A Teacher Inquiry

The Effect of Project Based Learning and Student Engagement and Motivation: A Teacher Inquiry

Teacher Inquiry Question What impact will using Project Based Learning (PBL) have on student engagement? Rationale In this inquiry, I would like to examine the principles of Project Based Learning (PBL) and their effect on student engagement in the classroom. My hope is that I will be able to apply these principles in my family studies classroom, where my students will become more engaged and interested in the lessons, thus contributing positively to their self-worth. I have decided to use PBL for the following reasons:

The Role of Technology in Contemporary Education

The Role of Technology in Contemporary Education

Technology advancement has caused a dramatic change in the learning environment. Many school boards in developed countries have embraced the use of various technologies in education, and incorporated them in their curricula. Many school administrators and teachers are under a conception that young generations are adept to technology and have undergone a fundamental change of fashion in learning. They believe that any technology that is used in education is welcomed by their students. While sometimes this conception may really be the case, many studies have proven otherwise. In addition, educators and administrators must focus on what role technology should be playing so that it can be implemented to benefit learners, and fortify pedagogy as a whole.

Don’t Track in Dirt with your Digital Footprint

Don’t Track in Dirt with your Digital Footprint

With over 1.5 billion web surfers worldwide, photos and videos have the ability to reach millions within seconds. Our digital footprint – the content available about us online (including text, photographs, audio and, video) is traceable and permanent. With people generating viral content around-the-clock, they are potentially damaging reputations, future job opportunities or even attracting online predators. It is more important than ever to educate younger generations about what they could be leaving behind. Rather than teach specifics from program to program, it is important as educators that we teach broad safety concepts to enable the critical thinking of youth while online. Critical decision making will enable a lifetime of safe Internet use regardless of the newest programs or websites that emerge.

‘Am I good enough, can I contribute enough, will my ideas be accepted?’ This candid reflection by a teacher leader remains with me years after the conversation (Planche, 2004). The comments offered were somewhat surprising to me as I knew the great reputation of the teacher who was questioning her own credibility as an educator. Having recently been given the role of ‘Literacy Coach’, and anxious about her new role, the teacher’s questions underscored the importance of confidence and trust in working with peers. As our schools shift to a more deprivatized form of teaching, where the notion of learning together and from each other has gained considerable ground, we must be cognizant of the kind of support teacher leaders need as those who have been deemed as ‘knowledgeable others’ in our schools. Teacher leaders often carry a significant teaching load along with mentoring/coaching responsibilities to assist their peers. Increasingly, systemic leadership is recognizing that teacher leaders are now central to school change and are equally important as those with more formal leadership positions.

Understanding Students’ Biological Clocks To Engage and Teach Them

Understanding Students’ Biological Clocks To Engage and Teach Them

Educators are concerned with drowsiness and a lack of attention of some students especially at the start of the school day. In doing a literature review, I have found that there are biological variables that affect student focus in the classroom related to human biological rhythms or more officially recognized in the scientific community as circadian rhythms. Reviewing the research in this area as it applies to the teaching of students would provide a better understanding that can equip frontline workers, in particular, with the necessary knowledge to counter the effects of students’ natural rhythms with the appropriate environments that ‘correct’ for these proclivities. In reviewing the research literature, I will provide some suggestions for a counter rhythmic classroom that I believe will prove successful in enhancing student engagement and consequently a better demonstration of the expectations and learning targets by sleepless students.

Issues of social justice demand that a strong and consistent literacy focus be a priority at the Richmond Hill Adult Learning Center where students are either language learners or people who left high school without graduating. Literacy strategies have two immediate functions: to enable on-the-spot learning in class; and to provide academic currency, such as essay writing skills, for future success. An action research project, undertaken by the teacher of grade ten English in partnership with a consultant, focused on strategies to enhance both comprehension of text and transfer of understanding into written essay format. Strategies include diagnostic assessment to enable differentiated instruction and ongoing scaffolding of learning. The success of this small project bodes well for students’ ongoing success in other venues.

As Ontario’s provincial School Boards struggle with the issue of an aging cohort of school and system administrators (Williams, 2001) the issue of succession management has become increasingly urgent (Hargreaves, Moore, Fink, Brayman, & White, 2003). To date, significant focus has been given to the number of school leaders who will be retiring which creates a potential provincial vacuum of leadership (McIntyre, 1999). Shifting the focus away from those who are leaving to those who are entering the ranks of school administrators, we see a cohort of young leaders entering an educational context that is dramatically different from that which their predecessors entered. Leadership development of this new cohort is a significant aspect of succession management in the new provincial context. The identification, training, and on-going support of new school leaders is a crucial issue for school districts across the province. Even if the ranks of retired principals and vice-principals are filled, new principals will be ill-equipped to handle the growing responsibilities of the role (Hargreaves et al, 2003). It is for this reason that in Ontario the context has moved succession management to the point of being an ‘impending demographic disaster of leadership’ (p. 8, Hargreaves et al, 2003; Williams, 2001).